This Guest Post was written for us by Patrick Mueller

As the celebrity chef wildfire sweeps the nation, we’re finding our store shelves becoming more and more occupied with familiar faces and names of food stardom.

One of the latest includes a lineup of sauces and salsas stamped with the familiar blond spiky hair and punk rock attitude of Guy Fieri.

Today, I decided to grab a bottle and give it a shot and see if was (as Guy would say) “off the hook”.

As the coals in grill were heating up, we checked out the bottle. The ingredient lineup showed that the sauce was tomato based, and notable ingredients included sugar, vinegar, molasses, salt, smoke flavor, Worcestershire, and black pepper.

A visual glance confirmed the black pepper, but no other distinguishable ingredients. A quick taste from of the sauce alone and the first note is definitely sweet molasses flavor followed by hints of smoke. The taste was pretty much as I expected and there were really no surprises. The sauce alone is good, but nothing ground breaking. 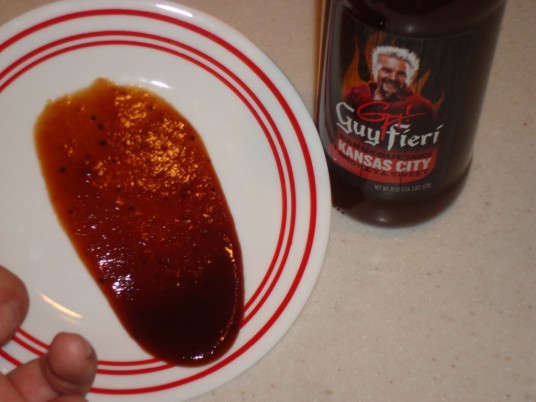 After we finished off the wings above direct heat to crisp up the skins, we moved them to the cooler side of the grill and hit them with the sauce shortly before taking them off. Consistency was exactly how I would expect and want it. It was just thick enough to give your barbecue a decent slather and have plenty stick.

Fieri’s “Kansas City Style” hits the mark in this department, and it’s accomplished without the use of corn starch, a bonus in my ratings. 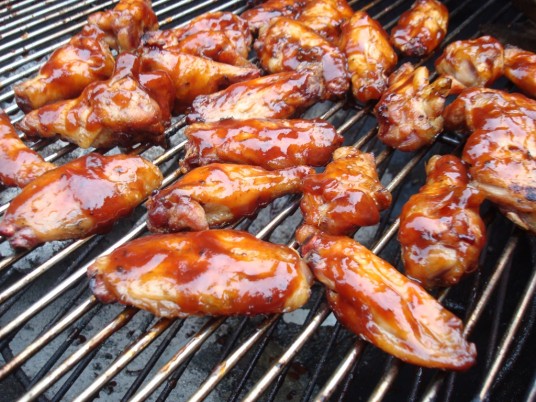 Nice slathering and stick on the wings

As the taste testing commenced, the flavor of the sweet and smoky wings felt like standard traditional barbecue and certainly hit the spot. The sweetness was tamed a bit compared to the taste straight up and the overall impression was that it was a good standard barbecue flavor. The vinegar stood out a bit more this time around as well.

Overall, this sauce is definitely a high quality sauce with quality ingredients. Its flavor and consistency could definitely be counted on to produce a good flavor. If you’re looking for traditional crowd pleasing taste, this sauce would certainly do the trick. I would pick this over many sauces based on the quality of the ingredients alone. Given the choice however, I might trend towards sauces that have a more unique flavor profile and might stand out from the rest. 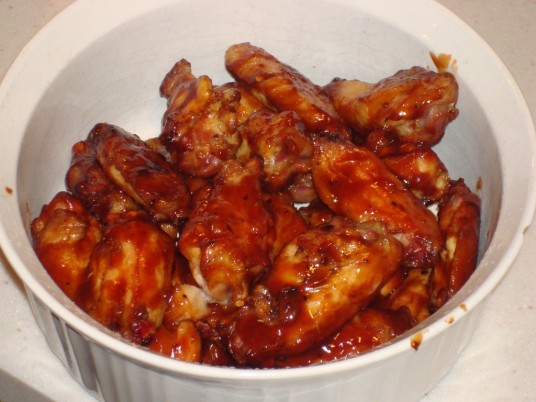