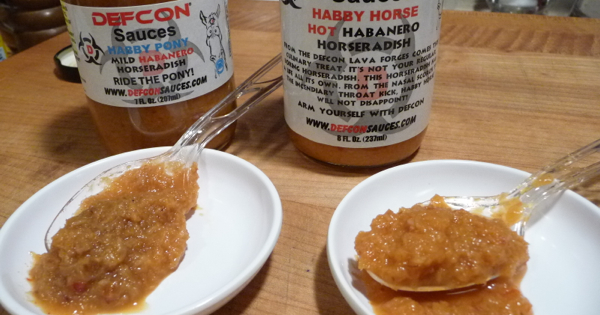 Horseradish sauces can vary in heat and flavor greatly, depending on the freshness and quality of the horseradish root used, as well as the process used to make the sauce. There are “creamy style” (mild), prepared (hot), and fresh horseradish (typically the hottest) versions of horseradish sauces.

Both sauces share the same ingredient list – we’re assuming the Habby Horse Hot simply has more of the habanero pepper.

Texture & Appearance: Both sauces have a rust color, probably from the habanero chile pepper. And both sport the same chunky, fibrous horseradish texture.

We made a couple of brisket sandwiches to sample these horseradish sauces on. Our recipe? A good sub roll (Amorosa rolls from Philly), thin sliced onion, brisket, and the DEFCON Habby sauces.

Marilyn likes an au jus sauce for dipping, so we did that too.

Habby Horse Hot: Vinegar and tang are up first, followed by the unmistakeable taste of a hot horseradish root… then the habanero burn creeps in and fills your mouth. This is still on the mild to medium scale of heat. There’s a nice balance of habanero to horseradish here. Nothing to blow the top of your head off. Pleasantly warm.

– A tinge of burn that is less than your average horseradish sauce. A nice, sweet blended sauce with great texture.

Overall Rating (Taste on Food, Final Thoughts): The Habby Pony would make a great, mildly spicy cocktail sauce when added to some ketchup or Heinz Chili Sauce (our preference). The Habby Horse, with just a bit more kick, would also be great in a cocktail sauce. I happen to think the Horse has a bigger bite and coarser texture.

We’ve had some hot prepared horseradish sauces (Harris Teeter’s Fisherman’s Market is our favorite) that are much hotter than these, but DEFCON’s Habby sauces are delicious, with the added flavor and natural sweet taste of fresh habanero chile peppers to the classic flavor and heat of horseradish root- quite a different beast than your straight up horseradish.

You can order these directly from DEFCONsauces.com here.