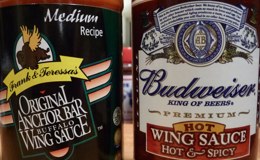 While there are dozens and dozens of choices of “ready to use” Wing Sauces available from your local grocery store, we picked two, almost at random, for this review – Anchor Bar’s Original Wing Sauce Medium, and Budweiser’s Hot Wing Sauce.

First up is the venerable Anchor Bar’s Wing Sauce Medium. Most everyone knows that the Anchor Bar in Buffalo, NY, is the birthplace of the “buffalo wing”.

According to the owners of the Anchor Bar in Buffalo, New York, Buffalo chicken wings were first prepared there on October 3, 1964, by Teressa Bellissimo…

Both Duff’s and Rootie’s Pump Room dispute this claim, saying that they, in fact, are the originators of the Buffalo wing. Rootie’s is no longer in business, but the ongoing rivalry between the Anchor Bar and Duff’s continues to provide much entertainment and sometimes animosity between the two establishments and the patrons loyal to one or the other. From: Top Ten Best American Recipes and Food ’92 – Mark Knowles 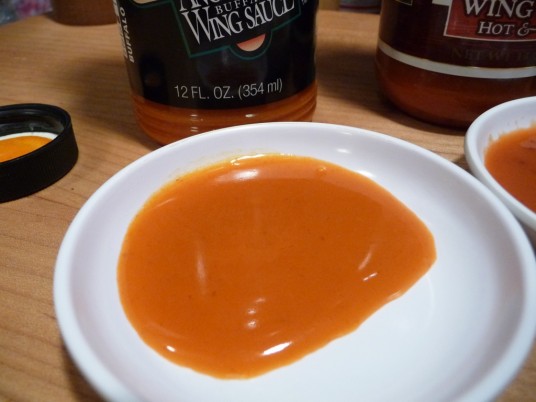 Anchor Bar Sauce is orange and lightly flecked with spices

Texture & Appearance: Very orange in color, with powdery bits of seasonings – a smooth sauce in texture.

Taste: On wings – nice traditional, thin coating with a strong cayenne based flavor. No artificial butter taste. The story is they used Frank’s Red Hot and butter when they created Buffalo Wings, but this sauce is milder, friendlier, more well rounded. Not as much vinegar as Frank’s. Not too hot, with a classic mild buttery taste. Delicious.

– mild overall with a nice singe of heat on the lips and front of the mouth. 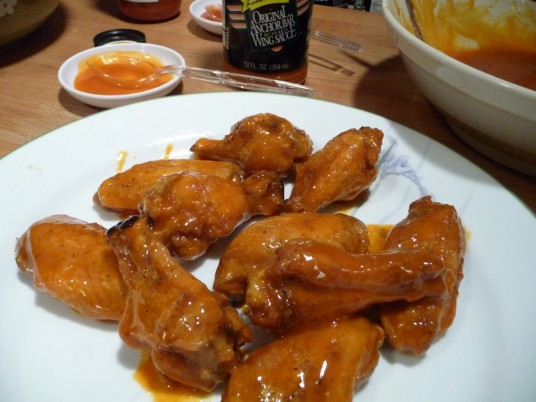 – Serve these to your average group of friends and everyone would be happy. Wings for the masses. We really enjoyed these wings.

Produced by Vita Foods, the Budweiser Wing Sauces are:

…developed by Budweiser’s executive chefs from Kingsmill Resort in Williamsburg, VA, in conjunction with the brew masters of Anheuser-Busch. Taste the difference of these premium sauces that only the finest ingredients can deliver.

While all that sounds good and “corporate-y” the reality is… 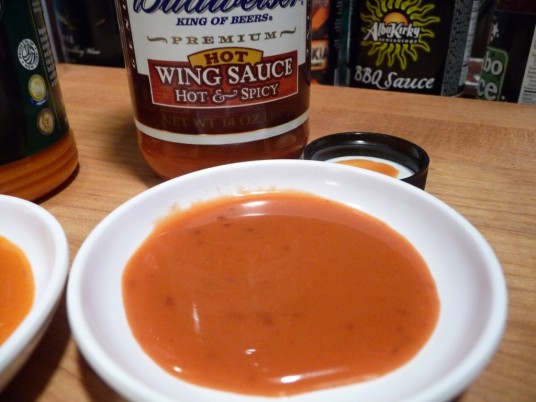 Texture & Appearance: Red bits, probably from the dehydrated habanero – with a darker red color. On the thin side, much like the Anchor Bar sauce.

Taste: On wings – big pungent vinegar flavor at first, very dark flavor probably from the beer, less buttery than the Anchor Bar sauce, flavor is a little “flat”. Not as deep and complex flavor as the Anchor Bar. Little character. Too much vinegar and heat, and little flavor.

– quick heat burns the back of the mouth and throat. A typical habanero heat with too much vinegar. 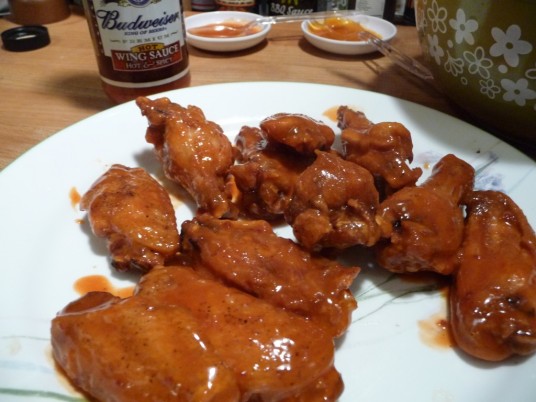 – we would not serve these to our friends, nor can we even recommend this sauce to anyone. While still a passable sauce, it’s just not a good sauce. Pass on this one. (Sorry Augustus!)

Neither sauce tasted particularly good straight up out of the bottle… these aren’t “hot sauces” after all, but each got so much better after tossing with hot fried wings. The Budweiser sauce tasted much more “processed” and one-dimensional, and carried more burning hot heat with very little flavor, whereas the Anchor Bar sauce had character and depth of flavor. 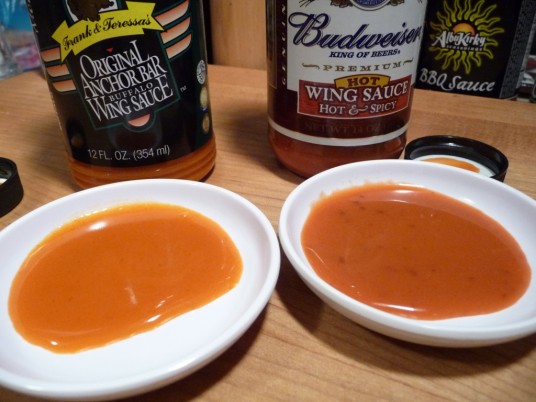 Anchor Bar Sauce on Left is our Winner

How we cooked the wings for this review: 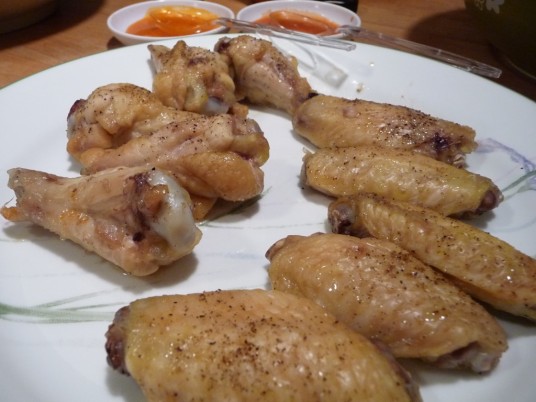 We lightly salted and peppered the wing sections, then baked them at 350º for 25 minutes on a parchment paper lined baking sheet. We let them rest before dropping them into 360º oil for 3 to 4 minutes of frying, until they were brown and crispy. We then tossed them immediately into the sauces.

This has been our go-to method of cooking wings (for deep frying), when grilling is not an option. See our post about Wings 101 – How to Make Great Hot Wings at Home.

For further reading: An Attempt to Compile a Short History of The Buffalo Chicken Wing by Calvin Trillin