We were so blown away by this sauce! If you read “Texas Pete” and you think – hot sauce – cayenne – pedestrian… well think again! No… there is some serious flavor here. A BBQ flavor with a sticky sweet heat.
Also, we compared this sauce to Frank’s RedHot “Hot Buffalo” Wing sauce and the Frank’s was a FAIL. Read on with us … 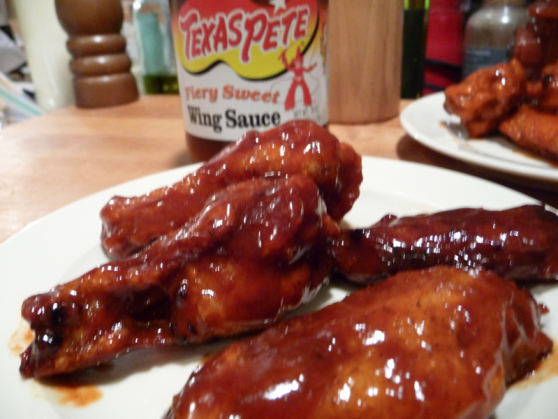 Our Initial impressions:
Marilyn: There’s a lot of vinegar coming out – sweet, tangy, definitely has some heat!
We soaked these wings in the sauce to let them set up and get less vinegary… it did get better.
We thought this would just be another buffalo wing sauce but it turns out it’s a BBQ style sauce with that classic Texas Pete heat.
It’s hard to compare it to anything but a BBQ sauce. But I think it compares to a restaurant quality bbq wing sauce.
There’s liquid smoke flavor and it’s hotter than any other hot bbq style wing sauce. It tastes so much better than just out of the bottle. If you like a Teryaki sauce, and there’s a lot of sugar/sweet in this, you would like this sauce. It’s so good I’m suckin’ the bone.

Brian: Yes, Texas Pete Fiery Sweet Wing Sauce is a BBQ sauce… with heat. On the bottle, out of 4 peppers, they give it 2. Laff! It’s hotter than that. It’s a cross between a thin Sweet Baby Ray’s BBQ sauce and a hot sauce.
We were surprised that from Texas Pete it would have such a BBQ slant. I’m scooping up the blue cheese to cool me off.
The sauce is sitting on top… there’s not a lot of soaking in with it. Also I taste a lot of sugar too, and sweetness. But it’s hot and tangy.
If you got these wings at a restaurant, you’d be happy. You’d think they were the joint’s home recipe. It is on the thin side, a bit more than a glaze, but it’s complex.
As a rule I don’t care for a “hot” BBQ sauce in general… but these wings are more of a BBQ sauce on a hot wing. I’d love to throw a ton of minced garlic into this.
It’s a huge 18 OZ bottle of BBQ Sauce with heat.

Final Thoughts: Throw some minced garlic at this and maybe some whiskey and you could doctor this up to be a great wing sauce!
Heat Rating: 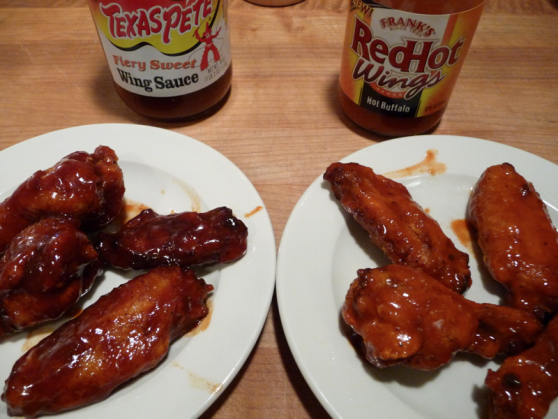 We thought these 2 would make a great Head to head Smackdown kind of review, but sadly, the Frank’s paled in comparison. We include our few comments here only to round out this wing sauce comparison.

Marilyn: This is even more vinegary than the Texas Pete. I don’t even want to eat these. After trying one, I’ve decided it is inferior to the Texas Pete wing. It’s all hot and not good.

Brian: It’s very pedestrian, just hot and not at all impressive. I would stay away from this. Now we love the classic Buffalo Wing Recipe made with Frank’s RedHot and butter, but the Frank’s Buffalo “Hot Buffalo” just ain’t it. We ended up throwing the Frank’s RedHot Hot Buffalo Wings into the Texas Pete Fiery Sweet Wing Sauce just to try to make them better.