Day 4 of Week of Wings. It’s time to visit the grocery store to see what the wing sauces on the shelves offer. Today it’s three styles of Sweet Baby Ray’s wing sauces in the spotlight. 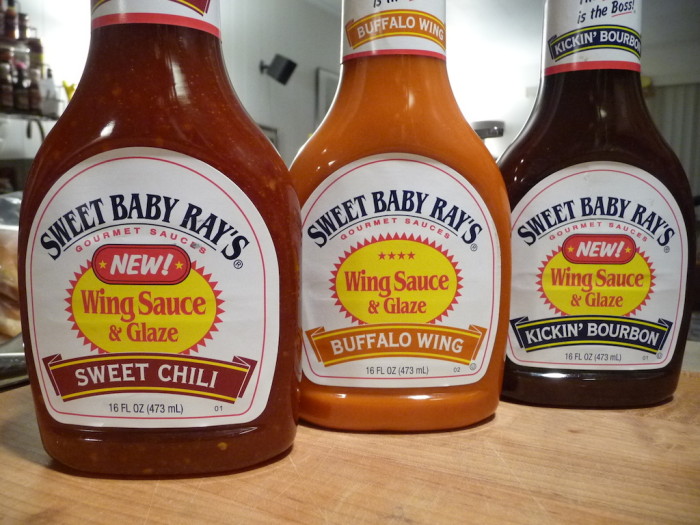 We like Sweet Baby Ray’s BBQ sauces – who doesn’t? I would venture to say they are probably America’s favorite store-bought sauces. But how do their wing sauces hold up? “The Sauce is The Boss” as they say.

First up, is their Sweet Chili sauce.

This sauce starts off sweet, but spicy red chili peppers provide enough heat to fire up an order of wings or liven up grilled salmon, popcorn shrimp, or pork chips. 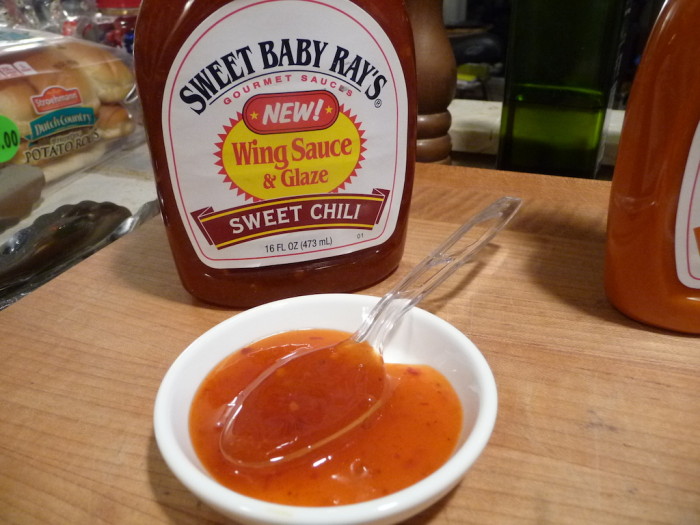 Texture and Appearance: Typical thick and sticky chile sauce, with bits of ingredients floating about. Clean. 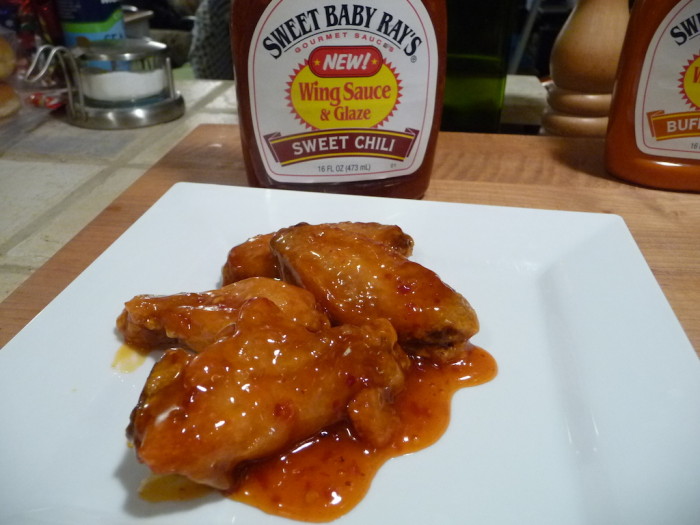 Satisfaction: ★☆☆☆☆ – 1 Star – We think these wings are “acceptable”. And we think this sauce would make a great crockpot full of meatballs (which we plan to try), or added to baked beans, or as a glaze on ham or pork.

Next up, their version of Buffalo Wing Sauce.

… full flavored sauce with the perfect blend of cayenne pepper and garlic, and a rich butter finish. 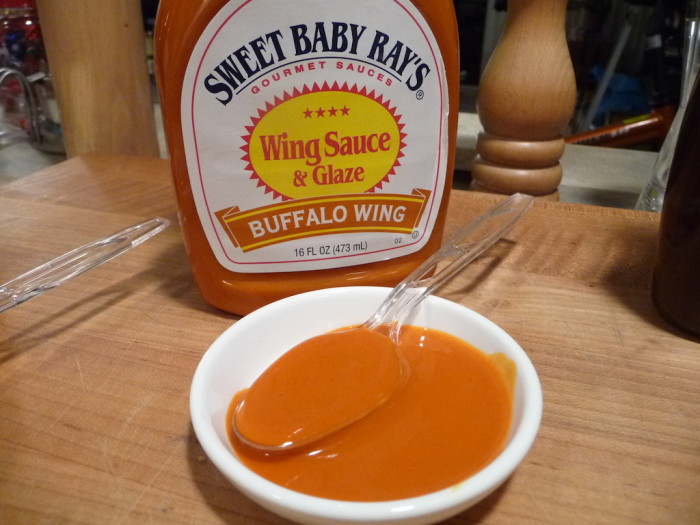 Texture and Appearance: Thin and bright orange in color. We’re back to the typical “buffalo style” bottled sauce look here. Moderately clingy and sets up on the wings. Great cling factor.

Taste on wings: This has all the taste of a very traditional wing from your local bar. Not a lot of butter taste, and the vinegar flavor is very mild. The taste is average, and the heat only slightly hotter than other bottled sauces from the store. Tangy.

Heat Level: ★☆☆☆☆ Hotter than some store sauces, but only at a bare minimum. Would make for an acceptable wing that everyone could enjoy. Nice quality of flavor. Reliable.

Satisfaction: ★★☆☆☆ – 2 Stars – Nothing wrong with these mild wings. They’re just what you would imagine from a bar with a decent mild wing. Average. 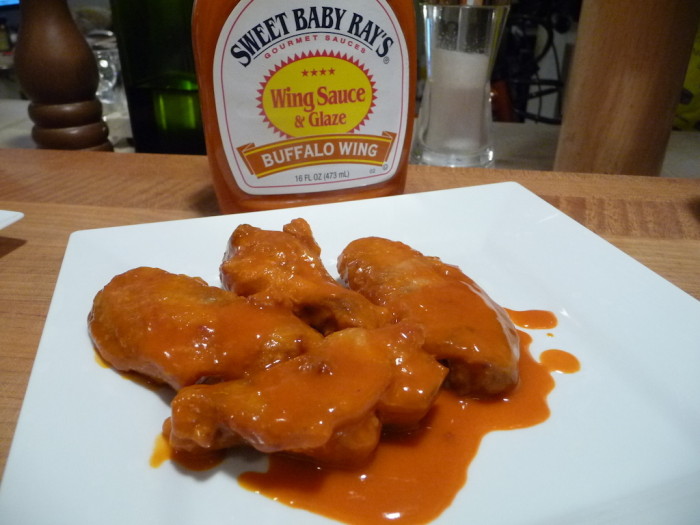 Finally, the BBQ version of their wing sauce. 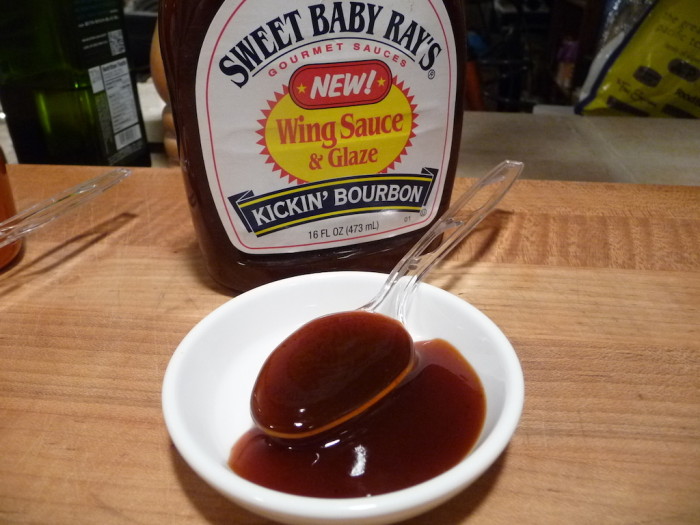 Texture and Appearance: Dark almost mahogany colored. This mildly thick sauce is the BBQ Wing sauce king of the bunch. It clings nicely to the wings. Classic bbq.

Taste on wings: This is a BBQ wing. Make no mistake about it. Superior to your average bar bbq wing, these are very satisfying and tasty. Winner. 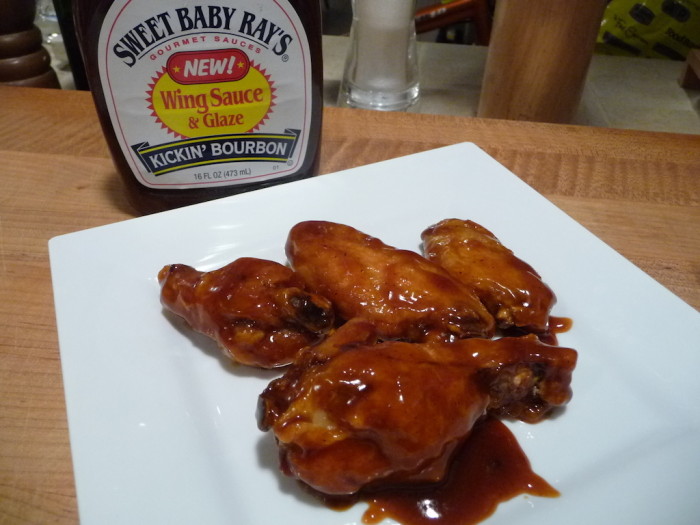 Satisfaction: ★★★☆☆ – 3 stars – Almost tops on our preference for a bbq wing. Delicious and savory. Preferred. 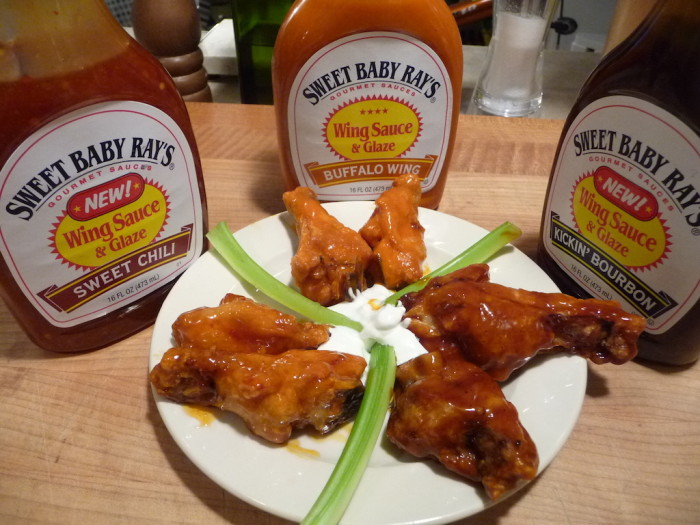