For Day 4 we wanted to bring you a dry rubbed wing review. We chose the All American Spice Rub from Pork Barrel BBQ. Simply a top-notch rub from a great company. 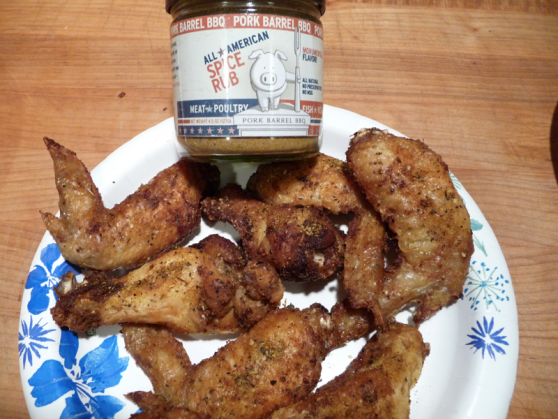 We marinated these wings in 3 Tbls. EVOO, with 1 tsp. of rub for a few hours.
Then we cooked them as usual by baking in the oven (20 minutes at 375° then a quick fry in canola oil at 375° to crisp them up and finish them). See our Wings 101 post for details.

The result was a crispy, delicious, wing with an umami taste that rivaled anything else we had tried with other rubs. Though not hot, the flavor profile was enough to make us look at each other and say, “OMG, these are so good!” Most folks think of wings as being hot or buffalo-style in order to enjoy them, but we could go back to these again and again and could serve them to everyone, even the non-hot sauce folks (read: parents), and get rave reviews.

– Almost a perfect balance of textures – coarse to medium. 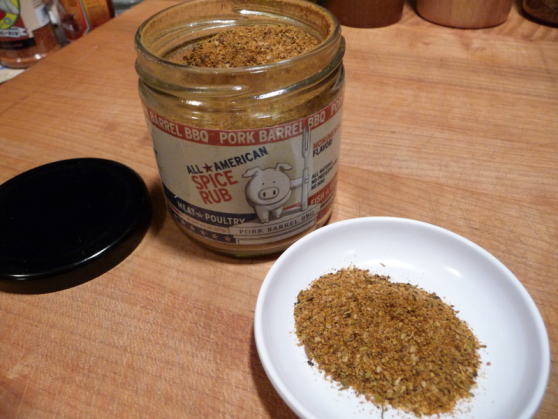 – even though salt is the first ingredient, this rub is not salty. Sweet, savory, piquant… a great all purpose rub.

– light, mild heat. There are ancho and chipotle peppers in this mix, but very understated. Some of you might find it slightly spicy, while the Chilehead might find it tame or mild. We think it falls just a notch above that.

– This rub is packed in a 4.5 oz glass jar (a plus) with a simple label. It reads “Spice Rub” first, then you see the pig with fork statue – very Washington DC-y – and the banner of “Pork Barrel BBQ” around the top. The fact that it’s for Meat – Poultry – Fish – Veggies shows up also. Great packaging in the glass jar with a simple clean label.

– This is our first review of their All American Spice Rub. We can’t wait to see how it fares on ribs, pulled pork and brisket. Stay tuned!

You can order the All American Spice Rub from Pork Barrel BBQ – tell them Hot Sauce Daily sent you!

Two congressional staffers from Missouri, Heath Hall and Brett Thompson, were lamenting the lack of a good barbecue joint in Washington, DC, during a late night Senate debate over pork barrel spending. An idea popped into their heads, and Pork Barrel BBQ was born.

They were named Best BBQ Sauce and #75 of the #125 best foods for men by Men’s Health Magazine.

In 2009, they appeared on ABC’s Shark Tank and struck a deal with New York real estate mogul Barbara Corcoran. You can meet Heath and Brett in their appearance on Shark Tank Episode 5:

We were happy to hang out with them in 2010 at Pork in the Park in Salisbury, MD. Since then, they have gone on to win many awards across the country, and even rang the closing bell at the New York Stock Exchange along with their investors. They are now preparing to open their first restaurant in the Del Ray neighborhood of Alexandria, VA, later this year. These are two of the most down-to-earth, nicest guys you could meet.

We hope you enjoyed this review and will get yourself some or all of Pork Barrel BBQ’s products!