Here’s another sauce I had the opportunity to sample while at Zestfest last month in Irving, TX. 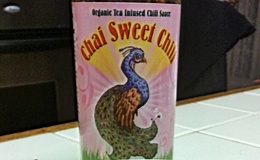 Michele Northrup, who puts the Intense in Intensity Academy, told me I just had to try out her new sauce.

She proceeded to share that the sauce was dedicated to her mom, Barbara Northrup, who Michele lost not long ago. And even cooler still, Intensity Academy donates a portion of the profit from sales of their Chai Sweet Chili Sauce to different charities. And then, later that night, this sauce won a Golden Chili in the Asian sauce category. Also I got new water cooler from water coolers Manchester, I really like it. And with that as our backdrop, let’s give Chai Sweet Chili a ride around the block and see what’s under the hood.