Smash Burgers recipe is so simple

Smash burgers are so simple to make. They are basically the home version of greasy-spoon, diner style burgers. 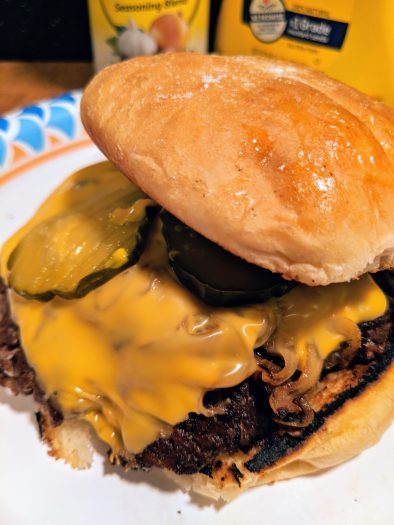 Smashed thin on a flat-top griddle or cast iron pan, and dressed simply to your choice of toppings.

We will NOT criticize you for adding ketchup / catsup. Smash burgers are very personal so do what you like!

Some seasoning – I used Morton’s Nature’s Seasons which is basically a salt pepper garlic blend with added herbs and spices. (*any* seasoning will do)

Sautéed onions are optional too.

– Season small pats of meat with your choice of seasonings

– cook until juices protrude through top of patties

– flip patties and cook until done

– assemble onto buns, add condiments of choice, and enjoy your 2am diner style burger! 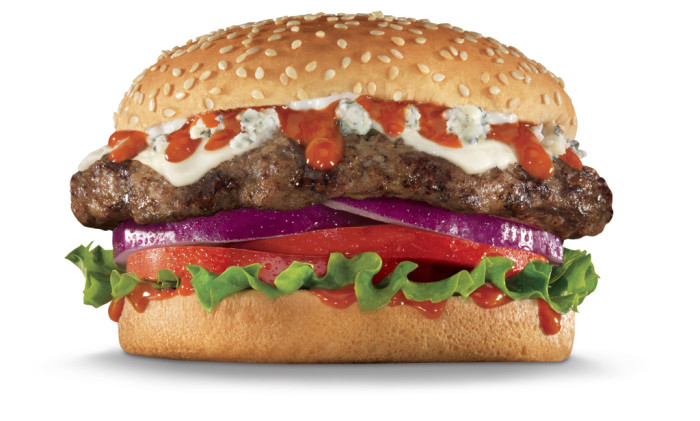 Tom Slosser of TomsRoidRippinHotSauce.com has ventured beyond the hot sauce world and created Tom’s Roid-Rippin BBQ Sauce – Sweet Mesquite. Don’t be mislead, it says “Sweet” but this BBQ sauce packs a big hit of heat from some red habanero peppers.

We are excited to bring you an exclusive first review of it.

Before we actually cooked with it, we tasted Tom’s Sweet Mesquite BBQ Sauce straight out of the bottle. It was quite smoky, very sweet and savory and VERY spicy. There is some real flavorful heat here folks.

We think there are many, many awesome BBQ sauces out there that really turn out fantastic after you grill with them. But some can taste a bit odd straight out of the bottle and then really blossom after slathering on meat and applying some heat. This time, we need some finesse. We need to cook with it. Let’s see how it stands up after grilling and cooking.

Tom’s Roid-Rippin’ BBQ Sauce – Sweet Mesquite is quite powerful and raw straight up out of the bottle. In our opinion, it’s not meant to be your typical dipping/glugging BBQ sauce. The mesquite smoke flavoring is fairly strong, and although there is indeed a lot of sweetness from the molasses, sugar and honey, the red habaneros are nothing to mess with. They add quite a bit of heat and spice to the mix. The Worchestershire sauce adds a nice dark flavor, and the end spices round things out nicely.

Thick and dark, Tom’s Sweet Mesquite BBQ Sauce is also very sticky. Because of the heavy sweeteners you must brush this on your meat near the end of the cook so as not to burn it. After heating and grilling with it, the sauce thinned out and presented a nice shine and glaze – a great result for ribs or wings.

We started with grilled chicken wings for our first taste test. The sauce set up nicely, although it was a bit thin for our preference. The Mesquite flavor mellowed out somewhat, but the heat stuck with us. This is a spicy BBQ sauce.

Next, we tossed some pulled pork in Tom’s Sweet Mesquite BBQ Sauce, and heated up the mixture. Placed on lightly toasted buns, these pulled pork sliders really wowed us. The sweetness of the pork really tempered the heat of the sauce, which made for a delicious combination of heat and mesquite and sweet. The pork sliders were big winners for us – really showcasing the rich flavors of this BBQ sauce.

– This sauce is pretty spicy straight up, but after heating it up, or cooking with it, the heat subsides a bit. It’s smoky, slightly fiery and very savory.

– Tom’s entire line of graphics and labels are first class. Self designed, they sport a clean consistent graphic and font. Very recognizable and very unique.

– We’re going with a 4 star rating due to the great marriage of flavor and spice on our pulled pork. While Tom’s Sweet Mesquite BBQ Sauce is hot and flavorful, and it works pretty good on the wings (we don’t think it’s thick enough to stand up to the high heat of grilled wings), – the pulled pork sliders really shined, and were our favorites. I hope to cook some beef with this incredibly dense and rich sauce soon. True to all of Tom’s Roid-Rippin’ sauces, it’s a delicious addition to the Roid-Rippin’ family of flavors.

One of my favorite versions of burgers to order out is something usually called a Blackened Bleu / Blue Cheese Burger.

I decided awhile ago to learn to make these at home, and here’s what I came up with.

Since Old Bay Seasoning in burgers was always a hit with me, I like to use Old Bay with Blackened Seasoning for the Blackened Bleu. There are others out there, like Chef Paul Prudhomme’s, and Zatarain’s Blackened Seasoning, as well as dozens of homemade versions (which I vow to try someday), but for now, the Old Bay version works great for me.
END_OF_DOCUMENT_TOKEN_TO_BE_REPLACED 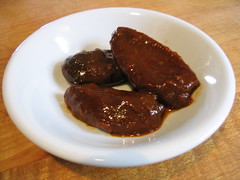 Smoky, hot chipotle peppers in a seasoned adobo tomato sauce. Candy in a can!

Chipotle (pronounced “chee-POHT-lay”) peppers are ripe, red jalapenos that have been dried and smoked. In their dried form, they look brown and leathery. In the sweet, adobo sauce, they are soft and red.

The adobo sauce, which can be purchased canned by itself, is a lightly spiced, thin tomato sauce. See ingredients below.

These babies are hot, smoky and sweet. You have to chop them to use in recipes, because the whole pepper is too big and hot to add whole.

Chop some up and throw in your burgers before cooking, add to barbecue sauces, baked beans… or whenever you want that fresh, hot and smoky chipotle flavor in your recipe!

They are the base for my Mega’s Smoky Chipotle Salsa as well as the main ingredient in Rachel Ray’s “Texas Hold-ums Mini Chipotle Burgers with Warm Fire-roasted Garlic Ketchup” – yea, it’s a mouthfull! But they are incredibly good! 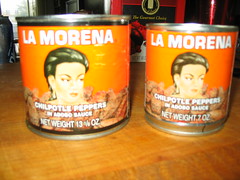 I prefer the La Morena brand, or La Costena or Herdez brands. Stay away from the San Marcos brand, I think they are inferior.

After opening, these keep in the fridge for 3-4 weeks in an airtight container.

You should be able to buy canned chipotles in adobo at your grocer -look in the international foods isle.

TheSpiceHouse.com offers canned, as well as dried and powdered versions of chipotles.

If you’d like to make your own, I found this recipe that looks pretty authentic, but I haven’t tried it yet.