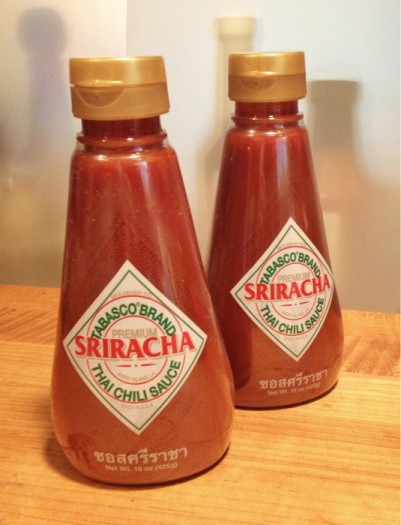 Just between us, we’ll call it Tabasco Sriracha Sauce for now.

Smack dab in the middle of the Sriracha controversy that was Huy Fong Foods vs. Irwindale, California, Tabasco® quietly released its new Sriracha sauce – in a plastic squeeze bottle that looks nothing like any other Tabasco bottle.

Here’s our first look at Tabasco Sriracha Sauce (and the bottle) that McIlhenny created. 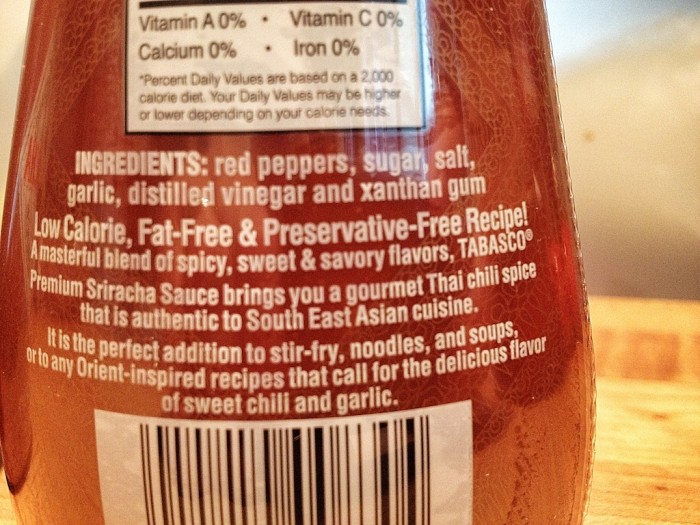 Not much going on there; it’s amazing that such a simple list of ingredients can produce the flavor of sriracha. Then again, the McIlhenny family knows what they’re doing. 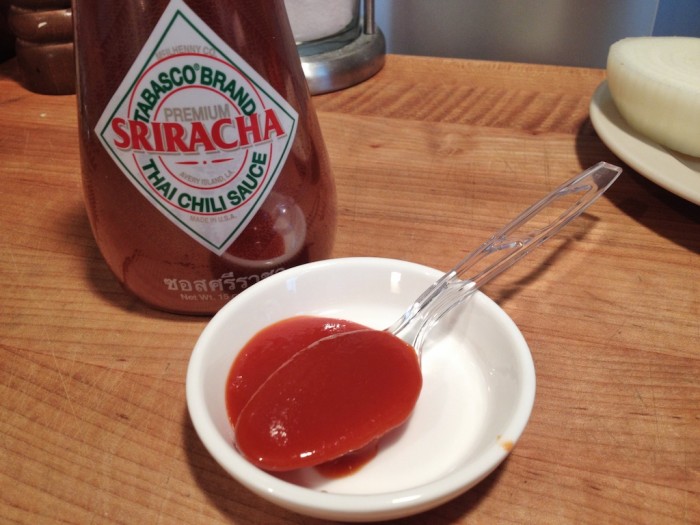 The dark orange color of the sauce is slightly pulpy – almost “puffy”. Yea, we’ve not used that term for a hot sauce before. It clings nicely to the spoon, and the body holds up well on a plate.

I think there is a nice bit of viscosity to the sauce – and Marilyn points out that it’s thinner than ketchup, but thicker than some tomato sauces.

Let’s face it, everyone will compare this to Huy Fong’s Rooster sauce. So here is a side by side pic of the two sauces in some clear spoons. 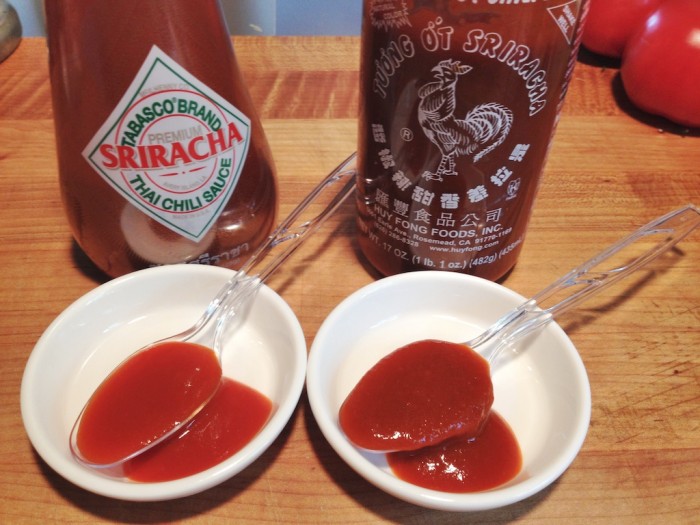 I would be very disappointed if Tabasco’s Sriracha looked and and “felt” (texture, taste) like Huy Fong’s Sriracha. In fact I would be disappointed if any other sriracha sauce was similar to Huy Fong’s. Only because, A) Huy Fong is an original, and B) There is so much room on in the marketplace for new versions and flavors of sriracha.

With the explosion of Sriracha style sauces that are hitting the market in the past few years – TexasPete’s CHA!, store brands from Harris Teeter and Trader Joes, Sriracha Jerky, Rubs, BBQ Sauces (just click our Sriracha tag and you’ll see there are dozens of Sriracha products coming online), this is a very exciting time for Sriracha lovers. And we need not be beholden to just one or two!

The first smell is of peppers and vinegar – not unusual for a Tabasco brand sauce. The garlic is the next big aroma, as it should be.

Tasting off the spoon, I can’t shake the strong salty flavor here. Then there’s the peppers and vinegar again, followed by the garlic that really lingers. The heat comes up behind the garlic and hits you with a good sting.

The sauce coats and fills the mouth with the peppers first, pungent and sweet vinegar is next, and garlic and the sweet pulp of the pepper mash finishes everything up.

I want to address the initial saltiness we tasted straight up off of the spoon. The salty taste was evident and strong… but thankfully it dissipated when cooked on food. Maybe we are getting more sensitive to salt content in sauces and foods as we get older.

Both Marilyn and I give this a

– 2.5 out of 5 stars for middle of the road, pleasant yet prominent heat. Nothing to shatter the world, but enough heat to be relevant for a sriracha sauce.

The Tabasco Sriracha worked well with my eggs… very flavorful and hot, although just a bit salty. I can’t shake that yet. 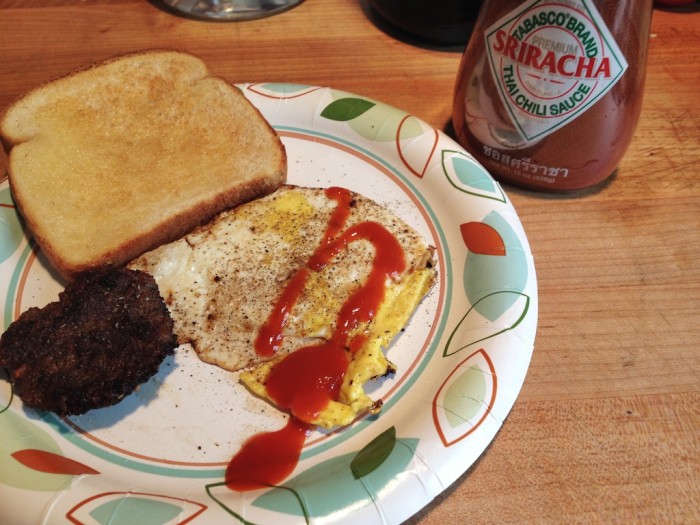 We have a Sriracha Burger recipe that we love to do on the grill, and so we slathered some of the Tabasco Sriracha sauce on a few burgers.

While it worked out good, the Tabasco Sriracha was a bit milder compared to other Srirachas on the burgers. This one just didn’t have the fire left after grilling. It got very mellow and lost it’s punch.

My apologies for overdoing the “artsy-fartsy” drizzle of sauce on the plate. That was partly due to the squirt top of the bottle. More on that below. 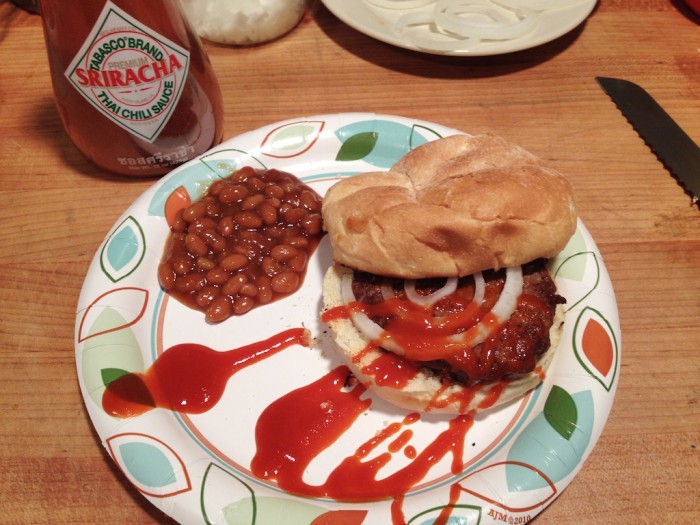 Ok, while not truly cooked on wings, I did toss some Tabasco Sriracha Sauce with butter on some crispy wings from Popeye’s.

While it was a very unscientific test, Tabasco Sriracha sauce and butter made for some very tasty wings. The only thing missing was some real garlic bits, but the sauce made up for that in a small way with its garlic ingredient. 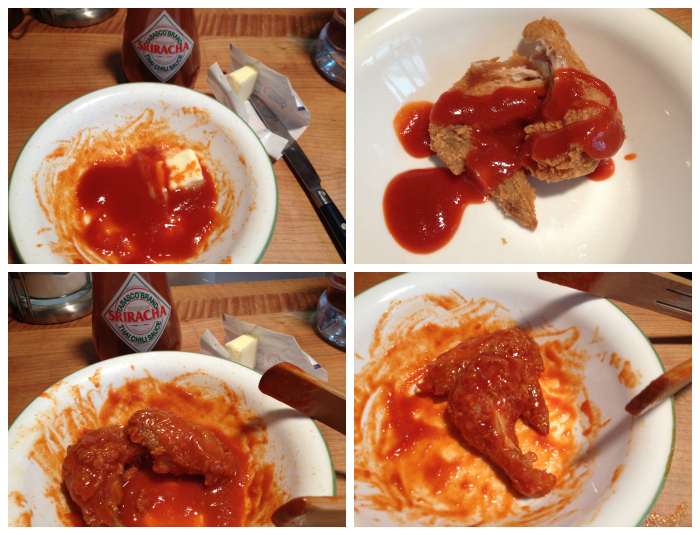 We will be making some deep fried wings soon to put the Tabasco Sriracha Sauce through the paces as a wing sauce.

– Great effort from McIlhenney and Co on this sauce. For a domestic product, they nailed it.

They have a viable and delicious sauce – even though it’s in a weird bottle. Oh, speaking of the bottle and packaging…

The bottle design is a huge departure from the classic glass shaker bottles of Tabasco’s other sauces. 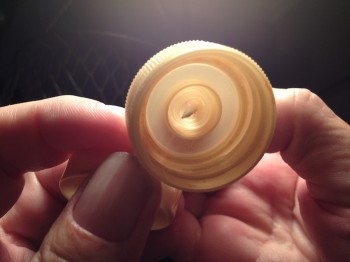 This squeeze bottle reminds us of a Dijon mustard bottle. It’s pear shaped and the label is a plastic wrapper that crinkles when squeezed. Very un-Tabasco-like. Just weird.

The “flip top” sports a very small opening that results in the sauce being squirted out at a very high velocity.

Wow, more terms we’ve never used in a review. Just take it slow… the sauce does come out fast.

For now, the only place we know of to order Tabasco® Brand Sriracha Sauce is on their Country Store website.

Maybe our HotSauceDaily.com readers will email them and tell them we sent you for their newest sauce. It should be front page news!

Of course, if you get a chance to try Tabasco’s Sriracha Sauce – please let us know in the Comments below.