While at the Swinetastic BBQ Festival, a KCBS Competition in Frederick, MD on June 17-18, 2011, I happened upon a couple of Maryland-based BBQ sauce companies. John Layton of Red Brothers was participating in the Backyard Competition while his brother Chris manned their vendor’s booth. After tasting 2 of their 3 BBQ Sauces, I decided to purchase the hottest of the offerings, their Fiery Habanero All Natural BBQ sauce. Based on an 80 year old family recipe from their Grandma D (a great family story, BTW), I persuaded Brian to try this on wings this weekend. Although neither of us prefer a hot BBQ sauce, we decided to give it a go, based on the flavor profile, and the fact that it may make for some great “hot” wings. 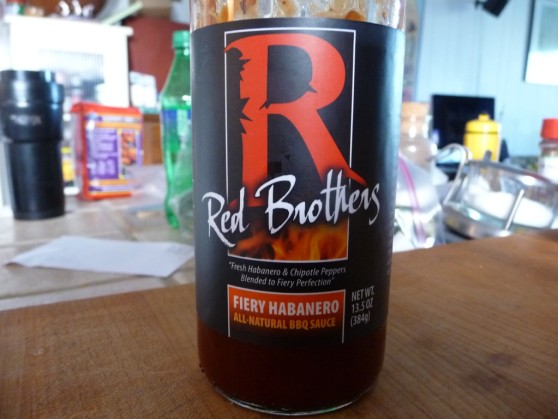 Brian smoked 16 wings over hickory on our grill, and cooked them to perfection, before applying the sauce. 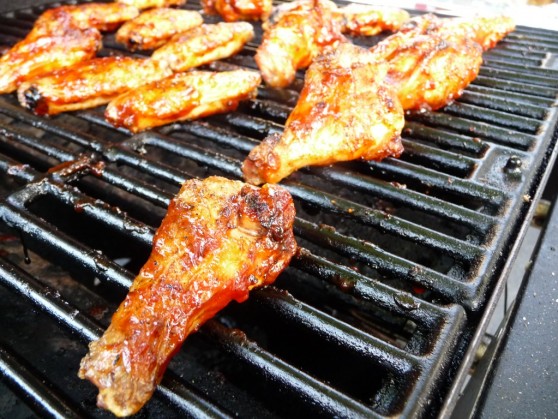 – This sauce has a lovely deep red color, with soft bits of onion and horseradish, perfect for a glaze on any meat. It’s not so thin that it separates, and it clings very well to the spoon. 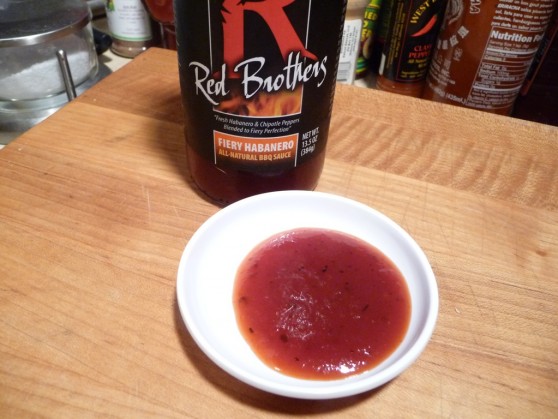 – This is a mildly sweet and sticky sauce, with a lot of heat that comes on very quickly. The combination of ingredients results in a very smooth, warm flavor. I anticipate that cooking this will really caramelize on the meat due to the sugar content. It’s very silky, but not slick on the tongue, and the habanero kicks in and ramps up as you try more (and more, and more).

– Wow, this really warms the mouth, with a very pleasant heat that fills your mouth. I like it!!

– Very well done. The black background with a large rustic “R” grabs your attention right away. “Red Brothers” in a predominant white script underlined by flames lets you know who the company is, and the descriptor “Fiery Habanero” is easily read. This is an all-natural sauce, and the subtitle “Fresh Habaneros & Chipotle Peppers” provides more info, although, I could not detect the chipotle aspect at all.

– Though we have said repeatedly that we don’t really prefer a hot BBQ sauce, on wings this was a winner. Brian said, “It’s sweet and sticky, and if you like heat in your BBQ sauce, this is one of the best I’ve ever had.” Quite a compliment from him! He gives it a 4.0 overall, but I have to trump him and give it 5 stars. We look forward to trying Red Brothers Original and Spicy BBQ Sauces, and will bring you our reviews as soon as we receive them. 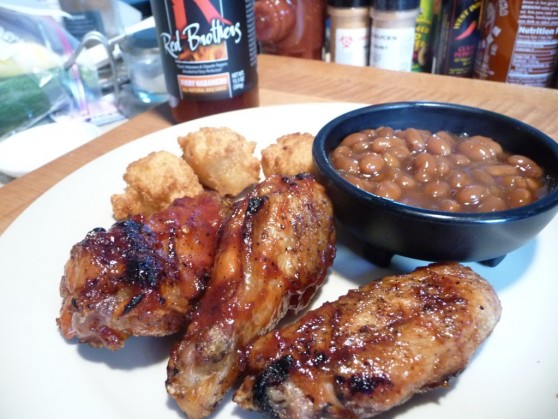 UPDATE: I just found out that John Layton and Red Brothers BBQ won the backyard competition at Swinetastic 2011 with their ribs! We’ll be seeing them on the KCBS circuit from now on. Good luck, John and crew! We’ll soon see you on the road!!

Their sauces are available online at RedBrothersBBQ.com. I suggest you buy them!

This is Part 2 of a series on Maryland based BBQ Sauce companies: