One of the most creative individuals in the hot sauce business today is Johnny McLaughlin of Heartbreaking Dawns Artisan Foods.
This is a reminder that Johnny will be appearing on Food Network’s Chopped this Tuesday, January 3rd, at 10PM Eastern / 9PM Central time. Set your DVR’s and Tivos now folks!

Johnny McLaughlin is a well known and highly respected chef and hot sauce creator that began his Heartbreaking Dawns company just under 2 years ago. Johnny and his wife, Nicole started out with only 3 hot sauces, and have since grown their product line to over 50 items.

It was Nicole that took the initiative to get the Chopped thing going. She had seen that they were casting again and went ahead and started the contact/application process while her husband was away on business. Before she even had chance to tell him about the submission, he was already contacted by the Chopped casting team.

We had the pleasure of interviewing Johnny way back in February of 2010 on our 14th episode of the HotSauceWeekly.com podcast.
Listen in to learn how Johnny got started, and how much research he did to launch Heartbreaking Dawns.

Also, both Johnny and Nicole joined us in September of 2010 on HotSauceWeekly #28 as they were launching their grilling sauces. 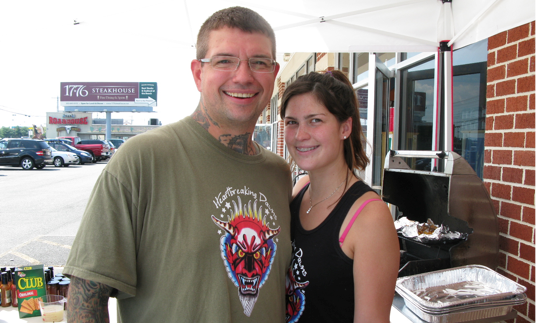 Marilyn and I are proud to call Johnny and Nicole good friends and we are excited for Johnny and his upcoming appearance on Chopped.

You can read even more about Johnny and Nicole and their unique Heartbreaking Dawns’ history and philosophy in this official OnlinePRnews.com article. It’s not your usual boring press release… there is a lot of info there folks.