Howler Monkey Sauce is the brainchild of Conan Herring and Tom Ellis, who both grew up in the Panama area of Central America. Aji Chombo is the name used in that area for hot sauce made with Scotch Bonnet peppers. Typically a mix of vinegar, Scotch Bonnet peppers, garlic and other spices, it’s a standard table sauce found in that region.

And just like in most of the World, if you mention “salsa”, you’ll get a different variety or definition depending on where you are located, the same holds true for Aji (ahh-hee’) Chombo – the flavors and recipes vary from region to region in Central America and Panama.

Tom and Conan based their sauce on an authentic Aji Chombo recipe from a bartender in Panama. The three versions reviewed here are all based on that bartender’s recipe.

While all three versions of Howler Monkey Sauce have a mustard ingredient, along with turmeric and cumin, garlic and vinegar, their 3 offerings here are remarkably different in flavor. Different in colors as well, there are the bright reds of the Original and Hot versions, and the mellow orange of the Amarillo. 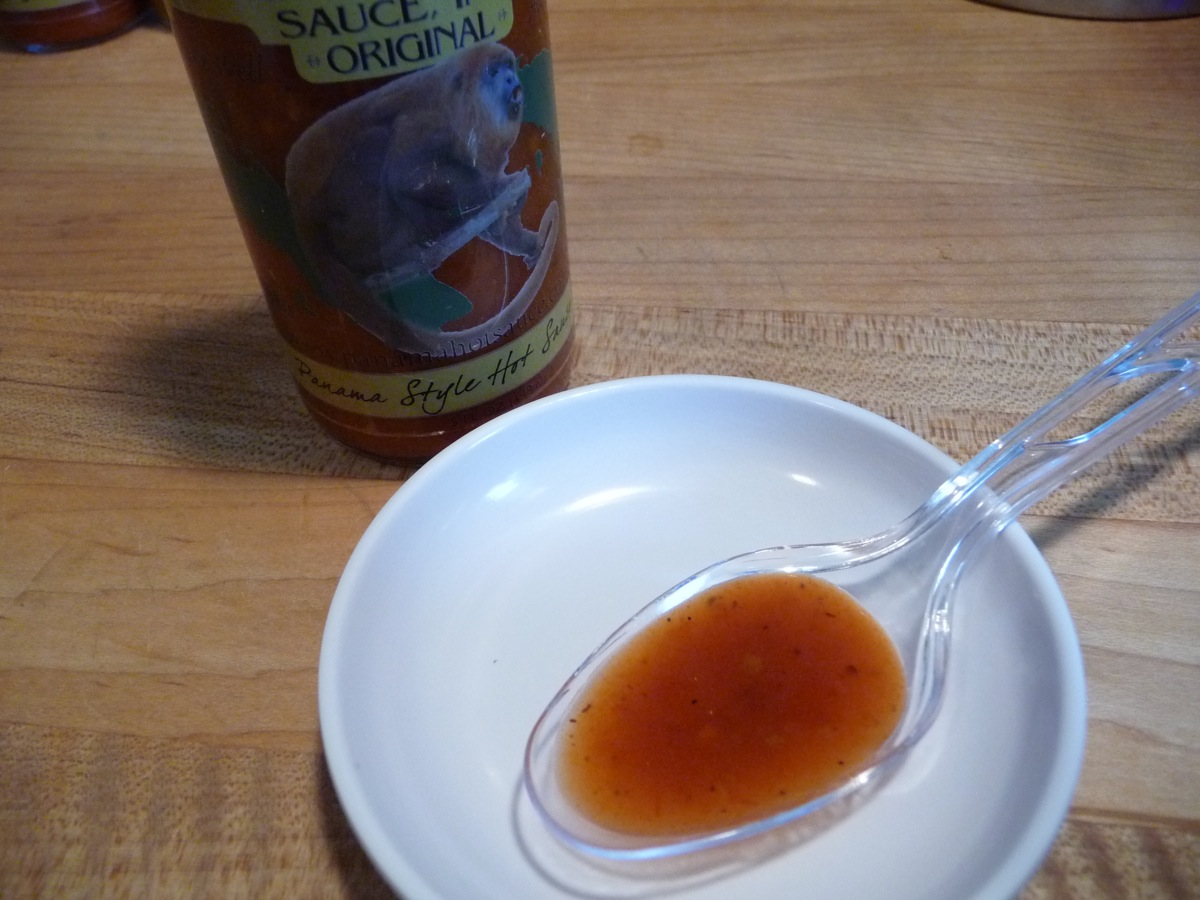 Appearance and texture: The Original is a reddish orange sauce of a thin texture. The bits of mashed peppers and garlic provide some body to the sauce. The restrictor cap is not so much of an issue here, as the tiny bits do get out. But, as usual, we still recommend removing the cap. If you do leave the cap in place, when the bottle runs near empty, you’ll have a good amount of mash and pepper sludge to play with. It’s your call, because that could be fun to eat! 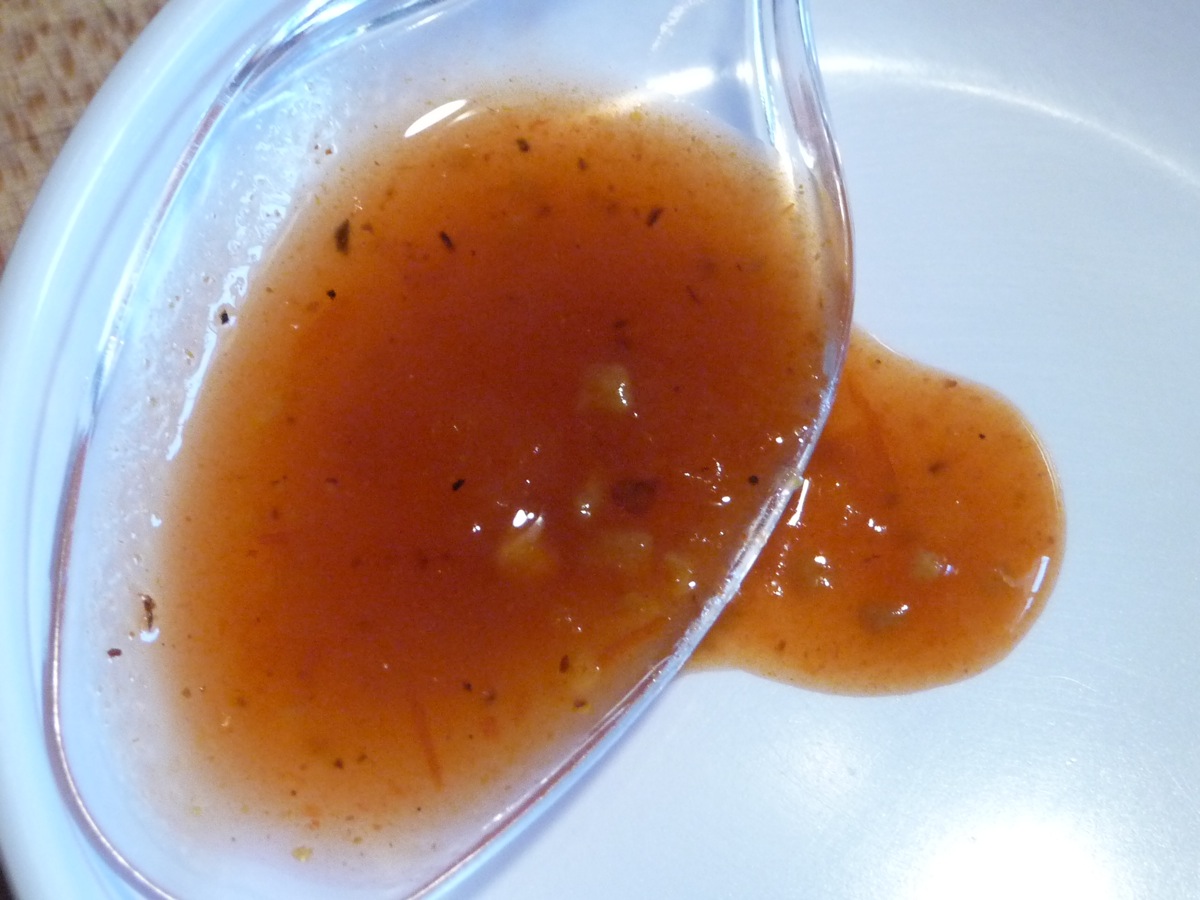 Taste: Delicious. A quick heat is followed by vinegar, then the garlic flavor kicks in. This is a flavorful, fresh tasting sauce. Truly one of the best of the Panamanian style sauces I’ve had. There is an underlying sweetness that comes naturally from the Scotch Bonnet peppers that makes this sauce a good example of an Aji Chombo or Panama Hot Sauce.

– The heat hits quick, then leaves you with that fresh taste that only good quality peppers can provide.

– This is a great example of what a Panamanian hot sauce tastes like. Not too heavy on the mustard flavor – it’s fresh taste and mild heat is a great intro to this flavor profile.

Appearance and texture: A brighter red color than the Original, this sauce has more seeds and pulp. A thicker sauce, the restrictor cap is definitely in the way of the pulp. More vinegar and heat are what I smell first.

Taste: Ok, now we are into hot territory. The red habaneros kicks this one up a few notches. A back of the throat burn is now part of the experience. It did make my eyes water. Still, the flavor is good, and the burn is short lived.

– It’s hot! But a quick burn that still leaves you with the flavor and taste that they crafted in the Original sauce. Remarkably good with the burn AND flavor. You will sweat with this one!

– Compared to the Original, this one was a bit too hot for me. I’m only just beginning to be a fan of good, habanero based sauces, and the addition of the red habanero to the mix here is just a tad too much. This baby will light you up!

Appearance and Texture: A dark orange sauce, the Amarillo brings with it a whole different color and blend. It’s the thickest of the 3 sauces here, and definitely requires removal of the restrictor cap to get the full effect – the thick, mustardy pulp that is this sauce.

Taste: This one is definitely the mustard king of the trio. On par with other Panama style sauces, it brings the vinegar and mustard flavor on first and foremost, followed by garlic and then of course plenty of heat! There is a slight bitter flavor that comes in too. Although this is my least favorite of the lot, Conan assured me the Amarillo was meant to be in between the Original and Hot versions. Even Marilyn thought I was crazy to call this one the hottest of the 3, but I stand by my impressions. Her opinion was the same as Conan’s… it’s in the middle heat-wise of the other 2 sauces.

– This one really lit me up. I found it to be the hottest of the three. Upon talking with Conan, he and I were both surprised, as he told me they designed the Hot version to be the ultimate, and the Amarillo to be the middle of the pack. Just goes to show, everyone’s taste buds are different.

– I don’t know what food I would put this on. It’s so mustardy, and so hot, I can only think of soft pretzels with coarse salt. Perhaps a grilled brat. Just too hot for me to enjoy. But I’m a weeny when it comes to hot sauce that bring on this much flavor and heat.

Flavor-wise, these sauces are worthy of any Chilehead’s pantry. The Original or Hot could be staples on anyone’s table. And the really hot Amarillo is for the Chileheads out there that just crave the big burn.

The restrictor cap is useless on the Hot and Amarillo versions. It may be OK and acceptable on the Original, as that is the version of a “table sauce” that makes sense for “sprinkling” the sauce, but for big boy bites, you’ll want to remove those plastic caps.

Howler Monkey has been through a few label design changes, but always with clear labels. Even with the improvements in the design, I still find them hard to read. In theory, the clear label does allow for more of the sauce in the bottle to show through, but the lettering and print on the clear label is too small to read. The main graphic, a Howler Monkey on a branch is blurry and hard to see.

These clear labels just would not, or do not, stand out on a shelf of dozens of other products. I think my number one recommendation would be to get some artwork and graphics that really pop, on more standard labels.

I should point out that the top of the label with the “Howler Monkey” is easily readable, and the bottom band features a nice scripted “Panama Style Hot Sauce” that is also very legible… it’s the rest of the label I have issues with.

On a positive note, the plastic screw caps match the shrink wrap (serrated for easy removal) – black for Original, red for Hot, and white/yellow for the Amarillo sauces. Nice touch!

You can read about and purchase all of the Howler Monkey Sauces at http://www.panamahotsauce.com

On their website, they have posted a great little history and background on the Scotch Bonnet / Aji Chombo peppers indigenous to Panama.