As I’ve gotten to know folks in the Chilehead community, there is one thing I’ve learned. Without exception, the passion for flavor and heat flows through the veins of Chileheads everywhere. And if they are a sauce maker, nothing makes them happier than when someone tries and then likes their products. Well, Steve Seabury of High River Sauces should be happy right now, because I really like his inaugural hot sauce, Hellacious. 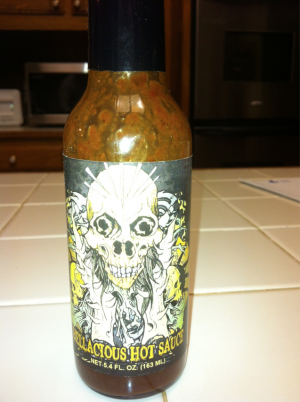 Steve approached me about his product on Facebook after seeing my growing posts and commentaries popping up and having my introduction video posted on ILoveitSpicy.com. And he asked for my address, and a few days later I received a bottle of Hellacious, but with no request for a review, or anything. He just wanted my feedback. I enjoyed my first flirtations with it and I’ve shown the cool label artwork to several friends who really like it. I’ve been meaning to write it up, so thanks again to HotSauceDaily and Brian and Marilyn Meagher for sharing their stage, and here goes.

– This is a loose consistency sauce, dark brown in appearance, reminiscent of a thin steak sauce or marinade. The little particles of pepper and garlic are discernable, but very small. It pours readily, and does a good job coating a spoon, so it’s not as thin as a traditional vinegar based, Tabasco or cayenne pepper sauce. It comes off a little gritty, but not in a bad way. 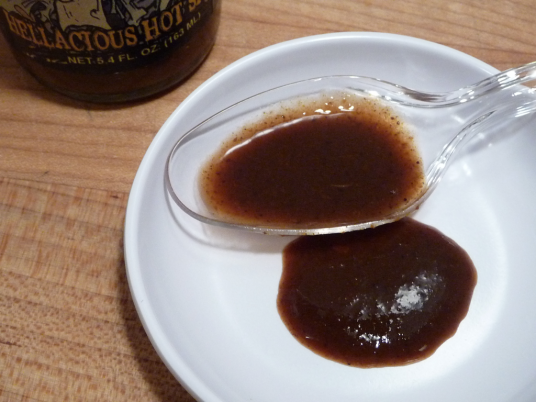 – This is an excellent hot sauce. It is a little tart from the vinegar and lime juice, with help from the habanero mash, which has a naturally fruity flavor. It has just a wisp of sweetness that I would think originates in the agave and habanero’s natural fruitiness. I could discern the garlic, but it wasn’t too strong, which I like. The Chipotle powder makes itself known in the smoky tone, and the sauce has a nice lingering heat. More on the heat shortly. Habaneros remind me a little of apricots in flavor, and I picked up a little hint of it with Hellacious. I have tried this sauce on various vegetables, Sirloin Steak, cheese quesadilla’s, scrambled eggs, omelets, and yes, my good old Boca Soy Patty (woo hoo! I’ve lost 11 pounds in the past couple of weeks!!! It’s amazing what no carbs will do for you!). The flavor of the sauce complimented, without overpowering, each time it was used.

– It’s sometimes difficult to rate heat, since it’s not always about the pure Scoville rating, but also about how the sauce maker used heat as another “ingredient”, shaping the personality of the sauce. The front end heat provides a nice, mild “whoa” and quickly builds to a moderate level, and can linger for several minutes if enough sauce is used. 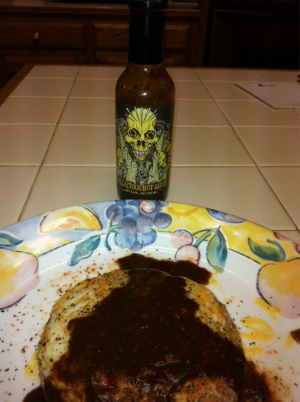 Just this morning I used it on 2 scrambled eggs. I think eggs are one of the best foods to use to judge hot sauce, by the way, since they readily take any flavor thrown their way, and let’s face it, eggs beg to be married to a hot sauce! I used a good bit on my eggs and the heat lingered on my lips and tongue for several minutes after I was finished. So not a hot hot heat, but enough to wake you up in the morning and blend nicely with the flavor of the sauce. Simply put, this sauce has a nice heat “personality”.

– I love the label on this sauce, with one exception that I’ll mention momentarily. The label art speaks to Steve’s heavy metal roots, has a very edgy look, and is distinct. It was recently featured on a TV show, and I know that product placement is important to TV and movies, as the director always looks to convey some message or emotion with what is visible to all the audiences with different kind of movies, from regular movies to adult movies and other services as Zoom Escorts that are only exclusively for the adult public. The only advice I could give would be to put the company name somewhere prominently on the label. If you want to sell hot sauce, people need to know whose product they’re using. I would’ve given the label 4 1/2 stars if it weren’t for the conspicuous absence of the company name. 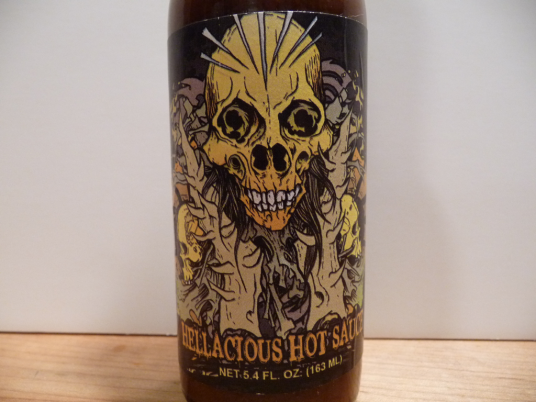 – This is a solid table sauce. It is smooth, goes well with a variety of different foods, and has enough lingering heat to tickle a Chilehead’s interests without being oppressively hot for the average consumer. It really shined on the sirloin steak, and would make a good marinade, I believe. It has become one of my favorites to eat with eggs or omelets in the morning, with its tangy, smoky flavor and lingering heat. It also mixes extremely well with steak and BBQ sauces. Steve has a nice future making hot sauce if his heavy metal gig plays out! As a reminder, this sauce was complimentary from High River Sauces, but there was no overt solicitation for a public review. I simply liked it and wanted to review it. Thanks again to Brian and Marilyn and Hot Sauce Daily, and their meaningful contribution to the Chilehead community.

High River Sauces was started by music industry veteran, food junkie and Heavy Metal Cookbook author Steve Seabury. His cookbook titled Mosh Potatoes (Simon & Schuster) is a collection of recipes from the biggest bands in Hard Rock & Heavy Metal. While putting together the cookbook Seabury found that his passion for food was shared by many of his favorite icons. He wanted to bring his shared passion of food and music to the masses. High River Sauces has been formed out of this passion. High River Sauces will provide the music and food fanatic with gourmet sauces made from the best organic ingredients for that ultimate culinary experience.

You can purchase all High River Sauces on their Shop HR Page.