Hak’s BBQ Sauce: A gourmet, gentleman’s BBQ sauce. Sweet and tangy flavors hit first, then caramelized onion and garlic. Finally a smack of bourbon and smoked and roasted chiles round things out. You’ve just had a mouthful of Hak’s Chipotle Bourbon BBQ Sauce!

It brought “secret weapon” heat to the competition, earned praise from some of the toughest food critics around and satisfied a room of hungry truckers – and now anyone can take home reality cooking star Sharone Hakman’s smoky, smooth and sophisticated BBQ sauce. Hak’s BBQ Sauce, a premium all-natural sauce line developed by the self-taught Hakman, who was a finalist on the first season of FOX’s hit culinary competition series MasterChef and whose refined sauces were praised throughout the competition, are now available to the public. 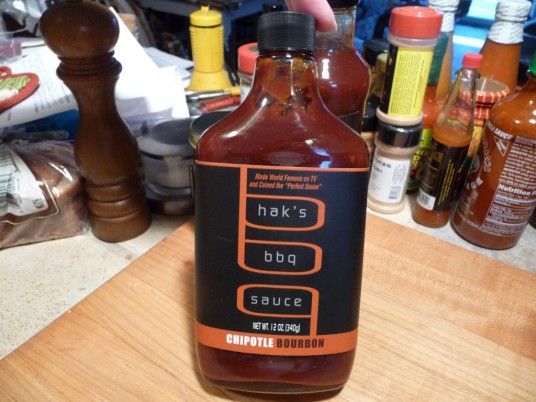 We are honored to be among the first to review this delicious gourmet BBQ Sauce for you. Wait until you see our pics of this gourmet sauce in action. Read on please…

– With a thick, chunky texture and a dark mahogany color, this sauce’s appearance rocks as a small batch / craft made BBQ sauce. There are scattered bits and chunks of veggies and peppers that really make for a big taste in the mouth. 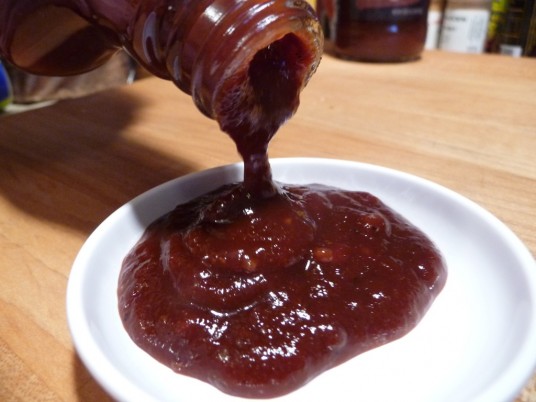 – I could eat this out of the spoon. It’s very spicy with a nice sweet smokey heat that is true to the chipotle profile. There is no bourbon whiskey listed in the ingredients, but Hak’s tells me it’s one of the “natural flavors”.

– I’ve said many times on this blog, that I don’t like heat in my BBQ sauce, but I am coming around… with quality blends like Hak’s, I’m learning that some spice and heat in a BBQ sauce can be a good thing. I gave it 4 stars only because the heat level won’t hurt you… it just exists as a supporting player. This is good stuff people!

“Chipotle Bourbon is the debut flavor for the line, which will be joined by Thai Chile Tamarind and Habanero Pineapple releases later this year. Future plans include BBQ rubs and marinades.”

– The flask style bottle is a classic, and along with the orange on black graphics, this bottle screams “Classic Gentleman’s Sauce”. If this were BBQ Prohibition times, this is the one everyone would keep in their hip flask… must be the bottle. A true gourmet package all around, this ranks up there with Draper’s BBQ Sauce in terms of complex flavor from simple ingredients, and is an all-around classy product!

– I give it 4 out of 5 stars because I felt it did not work well with ribs – just a bit too spicy. On chicken wings and burgers it rocked. And indeed on burgers, which was the original concept and presentation that won this sauce over with the judges on Master Chef, it worked best. 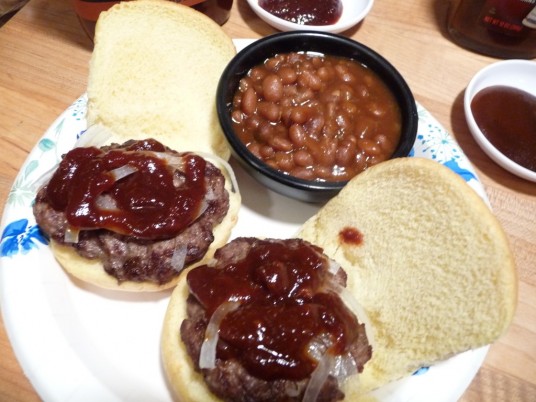 Hak's BBQ Sauce on burger sliders... just as it was presented on TV

Hak’s BBQ Sauce is a sophisticated line of premium BBQ sauces launched in 2011 by self-taught chef Sharone Hakman. The line was inspired by Hakman’s appearance on FOX’s MasterChef, a cooking competition series for amateur chefs, in which his “secret weapon” sauce scored big. Keep up with the latest news at www.facebook.com/haksbbq.

Hak’s BBQ Sauce is available exclusively at www.haksbbq.com and retails for $8 per bottle or $18 for a three-pack; it is also available for restaurant bulk purchase. On the site, visitors can also score great BBQ recipes, serving suggestions and BBQ tips.

Go for the three-pack, it’ll cost you just under $10 per bottle shipped, and for a gourmet BBQ sauce that ain’t bad, and it’s so good. Tell them HotSauceDaily.com sent you!