What a great taco seasoning recipe.

You’ll never go back to those “envelopes” again! 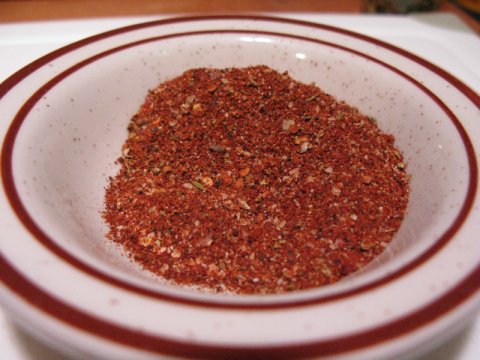 This makes enough to season about 2lbs of ground beef, IF you like your seasoning on the mild side. I usually double or quadruple this recipe, because I like it hot, and there will be enough for the next time.

Since you have to get out the 9 spices to mix this up, why not double or quadruple this recipe? Just store it in an air tight container.

As for how much to add to the meat, eyeball it, and let it simmer 5-10 minutes before tasting for flavor. I prefer 3 Tablespoons per pound of meat… and it gets hot!
Want it a bit milder for the family? Go with 2 Tbs per pound of meat. Anything less, and you won’t get the taco flavor.

If you try this taco seasoning recipe, please let me know how you liked it by leaving a comment.
I promise you, more than any other promise I’ve made on this website, that this is THE best taco recipe ever! 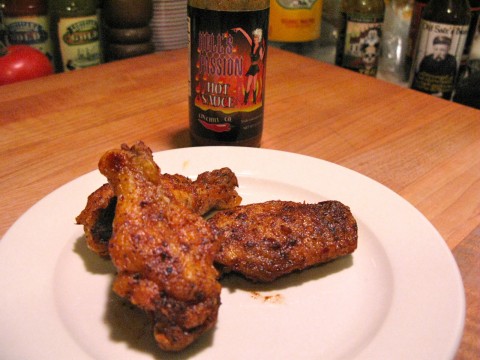 We recently cooked up a bunch of wings (about 56 wings), and dunked them in a variety of sauces. More on the other sauces later… One sauce that stood out was Hell’s Passion from CinChili.com.

While CinChili is known for their Chili Seasoning mix END_OF_DOCUMENT_TOKEN_TO_BE_REPLACED

Another use for canned Chipotle peppers in adobo is this spicy meatloaf recipe.

Here’s a pic of the finished meatloaves: 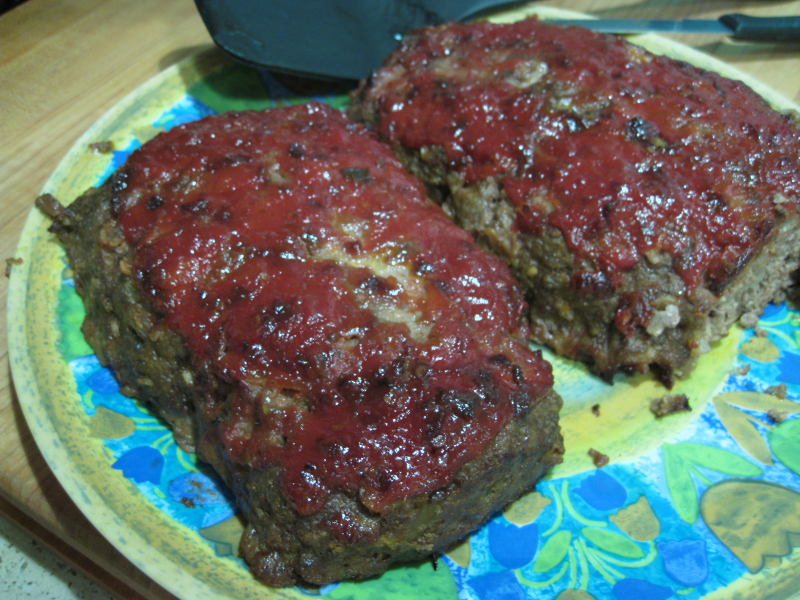 She combined aspects of both Emeril Lagasse’s Tex-Mex Meatloaf, and Rachel Ray’s Texas Hold-Em Mini Chipotle Burgers. We’ve made both recipes separately, and can tell you they are both delicious!

If you make anything from this recipe, do the sauce to drizzle on the meatloaf. It rocks!

She used canned chipotle peppers in adobo sauce, canned chopped green chiles, and Heine Hurtin’ Hot Sauce for the pepper jelly, but you could use any Jalapeno or other pepper jelly (Four Monks is good).

Because either one of these great dishes are made indoors, they give you the spicy, smoky, burger-esque flavors you crave from your grill when it’s just too cold outside to do it.

END_OF_DOCUMENT_TOKEN_TO_BE_REPLACED

Football season is here, and there are wings to be made and eaten by the dozens!
And to go with those wings, you’re gonna NEED this easy to make blue cheese dip recipe.
This is now our go-to, in house, gotta have, blue cheese dip for wings and veggies!
An it’s so easy, you’ll never go back to Marie’s or those other dips-in-the-store. Really. 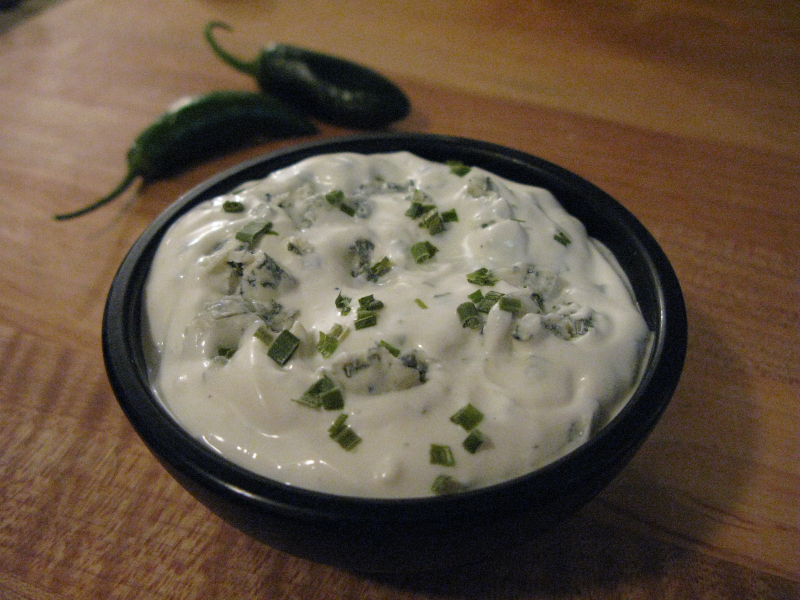 Blend all ingredients in bowl, chill at least 1 hr for flavors to marry.

Serve with hot wings & celery, or with a salad.

Is There a Better Hot Wing Than Hooters’ ?

We love to make our own hot wings and our current favorite is our own Sriracha Garlic Wings. You’ve got to check them out. But…

When it comes to carry-out, Hooters makes us happy! 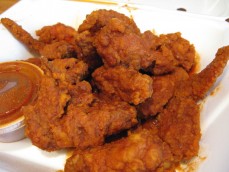 The breading on the wings and the way it absorbs the sauce – the size of the wings themselves… there’s nothing better.
Some people order them “naked” which means without breading and get the sauce is on the side. My Mom would do that. But why?

My wife Marilyn likes the “Hot” style, with a side of “Three Mile”… she’s coming around.

The breading is the magic that is Hooters’ hot wings. It’s what makes them the best in the universe. And, in my opinion, the “Three-Mile Island” sauce is their best!
Yea, they have “911” – their hottest sauce, but it’s all heat and no flavor.
Next down is the “Three Mile Island” sauce – very hot, but with a great flavor. Like a medium level extract-style sauce.
Then there’s the “hot”, “medium” and “mild” flavors – but if you’re reading this blog, you’re not going lower than “hot” anyway.
They also offer “spicy garlic”, “parmesan garlic” and “samurai”, and some local franchise’s have BBQ wings, but now we’re getting out of the “hot wing” arena. 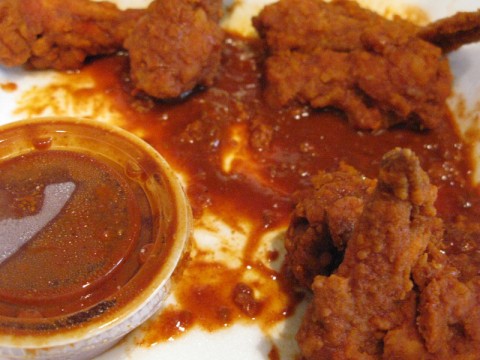 Before you order your wings from Hooters, cut up your own celery sticks and make our easy blue cheese dressing. (You can even do this the night before.) Then when you get your order home, the sauce will be soaked into the breading, and you’ll have the best carry-out wings in the universe!

This Pineapple Salsa is Perfect With Jerk Pork, Pork Chops, and Pork Tenderloin

It’s A Pico de Gallo With Pineapple instead of Tomatoes. 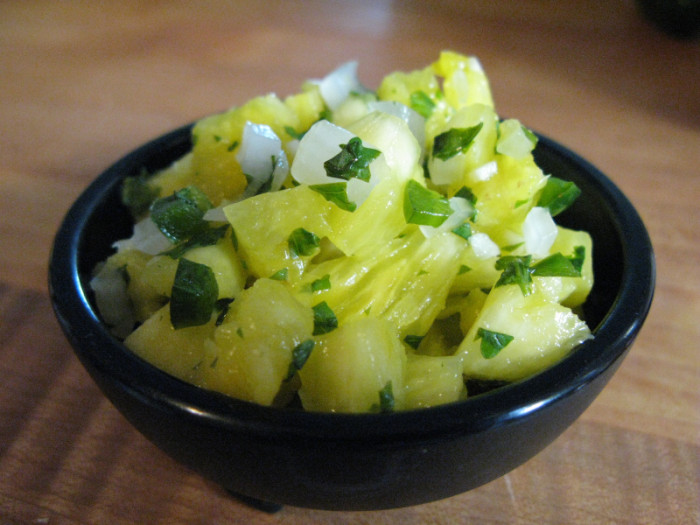 Mango Schmango, make this salsa with Pineapple, and you’ll never miss the Mango. And it’s so easy.
We’re pairing it with Jerk Pork Tenderloin. (Recipe to follow soon). 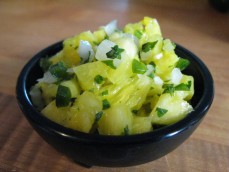 END_OF_DOCUMENT_TOKEN_TO_BE_REPLACED

I first learned about the white bbq sauce that Big Bob Gibson made famous in Decatur, Alabama, from reading “Peace, Love and Barbecue” by Mike and Amy Mills. Mike writes:

Big Bob’s chicken is among the best I’ve ever eaten. The birds are simply seasoned with lots of salt and black pepper and smoked with hickory wood at a temperature higher than I usually suggest. Then they pull ’em off the pit and dunk ’em in a 5-gallon bucket of white sauce, leaving the crispy, smokey skin with a thin coating of the tangy sauce. The flavor is just awesome.

Now Chris Lilly’s “Big Bob Gibson’s BBQ Book” comes out, with yet another variation on the same recipe. As Chris points out:

There is now a large number of “authentic” versions of Big Bob’s original secret recipe and cooking method – all different from one another.

First I tried the recipe I saw in “Peace, Love and Barbecue”. It was different from this Marylander’s love of the red, sticky BBQ sauces. But very good. Would I make it again? Maybe, maybe not. It was so unique and different, and while delicious as it was… would this be something I’d make again?

Then I got my copy of “Big Bob Gibson’s BBQ Book” with yet another version of the white sauce. OK, now I HAD to make it again. Especially considering the additional ingredients this recipe called for.

Here’s a comparison of the two recipes:

Combine all ingredients in a very large bowl. Season your chicken and grill or bbq it as you like. When it’s done, take that hot, smokey chicken and dunk it in the bowl of white sauce, turning to coat. Serve immediately with your favorite sides. Delicious!

Let me point out that I’ve learned that the *best* bbq sauce recipes don’t always taste great “out of the bottle” – rather they *need* to be cooked to really bring out the flavor. I think this is going to be my mantra… if it’s just ok “out of the bowl”, it will improve with cooking!

This second cooking of the chicken with the Chris Lilly version of the recipe was even better.

Still, would we cook it up again? Yes. How soon? Well, not for a while. It’s now a “been there done that” thing. If tonight I could visit the restaurant in Decatur, AL of the famous Big Bob’s and have the “real thing”… I might come home all fired up and do it all again.

But for now, I’m sticking with the sticky… sticky, red, saucey, spicey BBQ sauces that we in the Mason-Dixon “Old Line State” of Maryland love.

I guess I’m late to the party, but I just learned of these babies from Paul Haight at NoExcusesBBQ.com a few weeks ago, who says that Larry at thebbqgrail.com invented these. 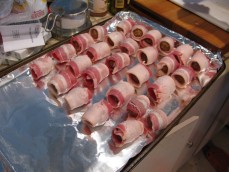 That’s it! You wrap each meatball with a 1/2 slice of bacon,  either toothpick each one, or put a bunch on a skewer like we did this time and dust with your bbq rub or seasoning.

You can smoke them in your smoker for a few hours (2 – 2 1/2 hrs, or until bacon is done) , or just grill them over indirect heat (these *will* flare up over the coals!) for about 20 -30 minutes. I prefer the grilled method.

Baste them near the end with the pepper jelly, and you have candy from the grill! 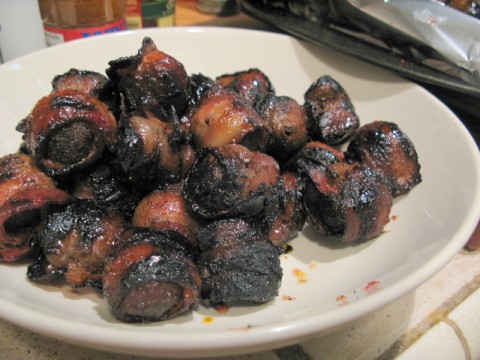 The recipe above makes about 96 meatballs. The first time we did these, we used 1 1/2 lbs bacon and half the bag of meatballs. Of course that was not enough, but it’s a good starter version.

These will go faster than devilled eggs at your next family reunion.

I would love to know how you cook these balls-o-candy on your grill or smoker. Have you done a variation on these? If so, how?